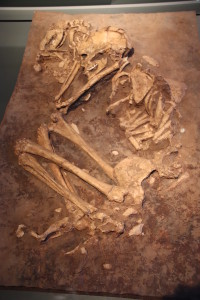 Dogs and cats are the most popular pets in the world. There are more than 200 million of them in the U.S. alone, and hundreds of millions more across the globe. And, as I write in my book, Citizen Canine, they are the most valued animals on Earth. We spend more money on them and are more emotionally invested in them than any other animal. We haven’t just welcomed them into our hearts and homes–we’ve made them fellow members of our society.

Our relationship with cats and dogs is so strong, in fact, that it’s likely to show up in the archaeological record. That’s one of the take-homes of a new study published in Anthropocene. Millions of years from now, researchers argue, it will be clear to future archaeologists–or perhaps visiting aliens–that we valued dogs and cats over all other animals. As we reported in a Q&A at Science with the study authors:

What do you think future archaeologists will make of our relationship with cats and dogs, based on what they see in the fossil record?

Karen Koy: Of all the animals, dogs and cats are more likely to be buried in a manner similar to people. There are pet cemeteries that are set up similar to human memorial parks. So if anything like that is stumbled upon, that’s going to say something different than a pit that people threw a bunch of pigs into randomly. I think it’s going to be obvious that we felt differently about dogs and cats versus pigs and cows and chickens.

Roy Plotnick: Will they think we worshipped them? I have no idea. Religious explanations seem to be a stock answer, but hopefully future researchers are more sophisticated than that.