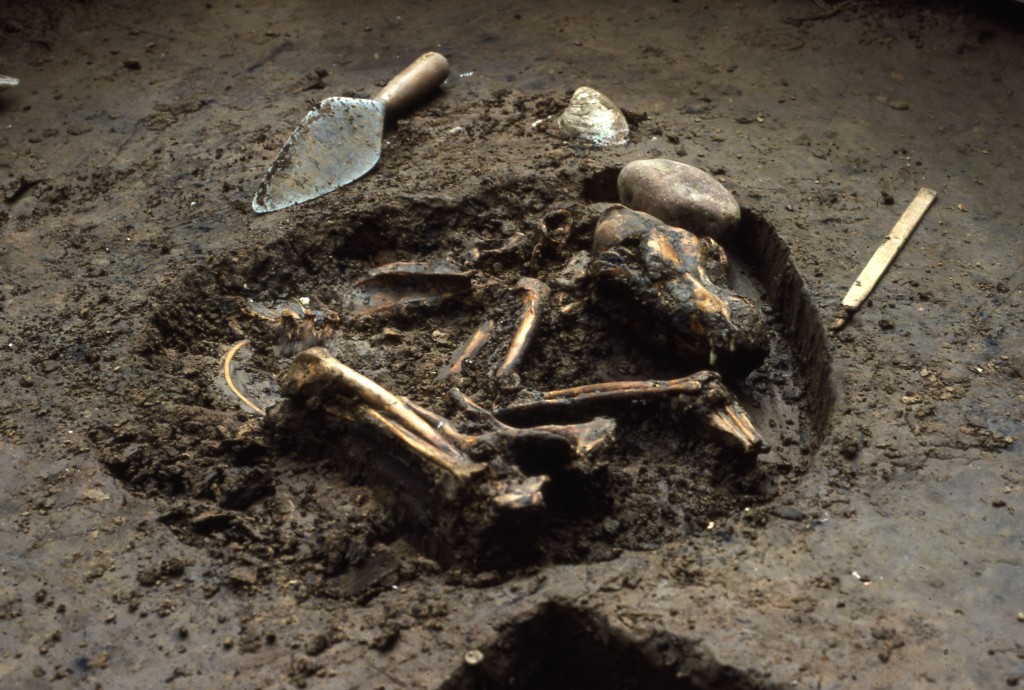 A 10,000 dog found at the Koster site in western Illinois. (photo by Del Baston, courtesy Center for American Archeology)

Dogs remain one of the biggest mysteries of domestication. Despite decades of research, we still don’t know where they came from–or even when they arose. But a couple of new studies are shedding light on when our relationship with dogs may have begun, and why it started.

The first concerns a handful of graves in western Illinois. In the 1960s and 70s, archaeologists excavated two sites here–Koster and Sitwell II–which were home to hunter-gatherers thousands of years ago. The researchers discovered the remains of five dogs curled up in shallow pits. Dating of the bones–reported last week in bioRxiv–reveals that they are about 10,000 years old.  That makes these the oldest solo dog burials in the world–and the canines the oldest dogs known in the Americas.

We don’t know what these ancient people used these dogs for, but the fact that the animals were buried alone, and that the bones showed no sign of butchering, indicates these humans had a close relationship with their canines. It’s likely they used them to hunt deer and other small game in a nearby forest; they may also have used them to guard their campsites and pull supplies. They may even have relied on them for warmth and companionship.

Given that dogs arose at least 16,000 years ago, the Koster and Sitwell II dogs were hardly among the first dogs people interacted with. But they may have shared ancestry with the world’s first dogs.

That’s one possible conclusion of a second study, published this week in Science, that looked at the DNA of one of the Koster dogs, as well as the genetic material of dozens of modern and ancient canines from around the world. The work indicates that these early American dogs trace their ancestry back to Siberia, and that they may have descended from a population of dogs that lived 16,000 years ago.

This is an important timepoint in dog history. The oldest bones confirmed to be from dogs come from Germany about 16,000 years ago. Though this is the earliest physical evidence we have for dogs, it’s possible they were around for thousands of years before then. But dogs arising around this time would make sense, given what was happening around the globe. The world was getting warmer, people were beginning to settle down a bit, and they were beginning to hunt smaller game like deer. Dogs would have been important–perhaps even critical–during this period to protect campsites against predators and stalk small game. Forging a relationship with the gray wolf–the ancestor of today’s dogs–would have been a risky proposition, but perhaps one that eventually became worth it given the potential benefits.

If this was happening in Siberia, it’s possible that dogs came into being in this part of the world. Or in this part, along with others.  And though the first humans to make their way to the Americas across a land bridge that connected Siberia to Alaska don’t appear to have brought dogs with them at first, they eventually did so, forming a bond that continues to pay dividends today.