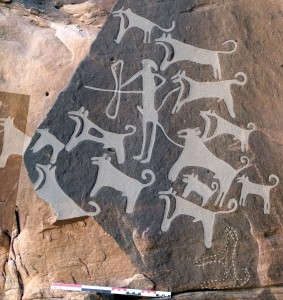 Humans domesticated dogs somewhere between 15,000 and 30,000 years ago. But although today’s dogs are family members, service animals, and war vets, we know little about man’s early relationship with canines. Now a new finding is providing a window into these bygone days.

Researchers have discovered images of dogs carved into rocks in the Saudi Arabian desert. An analysis suggests that the art may date back more than 8,000 years, which would make these the oldest depictions of dogs in the archaeological record. All of the canines are medium-sized and resemble the Canaan dog—a breed built for the desert—suggesting that humans may have bred these animals for the climate. All also appear to be hunting dogs, taking down ibex and gazelle, and even facing off against wild donkeys. And, perhaps most significantly, many seem to be tethered to the waists of human hunters by leashes.

All of this suggests that these early desert dogs were important hunting companions for humans who lived in this arid region thousands of years ago. They may have been so important, in fact—able to take down or corral animals too fast or too strong for humans—that people may not have been able to survive in this place without the aid of canines. And the leashes suggest that hunters may not have only used these dogs, but found a way to train them. (The leashes are also the oldest depicted on record, perhaps by 3,000 years or more.)

It’s possible that dogs served more than just a functional purpose, however. Many of the canines are shown with their own individual coat markings, stances, and genders, suggesting that these early human artists were portraying actual dogs that they knew—and loved.

Experts have long speculated that early dogs helped us hunt, and that this may have been the reason we domesticated them in the first place. But there has been no real evidence for this. The Saudi find—while likely representing a period thousands of years after dog domestication—is now the earliest inkling we have that this may have been the case. And perhaps most significantly: Even in these early days, we had begun to form a strong emotional bond with our canine pals, one that continues to this day.