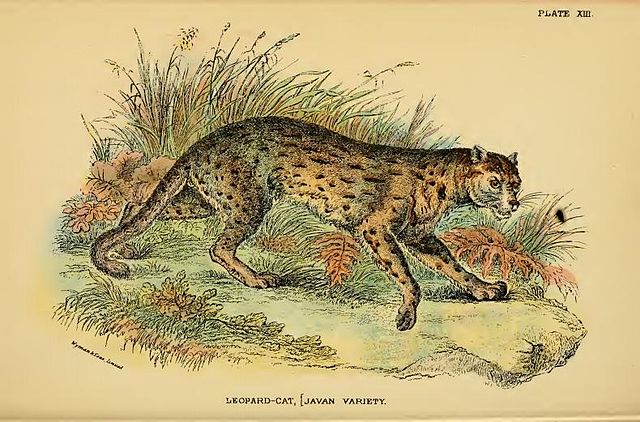 Illustration of Javan leopard cat from Richard Lydekker’s “A hand-book to the Carnivora”, 1896. (Wikimedia Commons)

In 2013, I wrote about the idea that the rise of the housecat was inevitable. A study had just come out indicating that cats were domesticated in China 5,000 years ago. If true, this would have represented a second domestication events for cats, since we already knew they had first been domesticated in the Middle East about 10,000 years ago. And because both events purportedly involved farmers taming local felines and seemed to have occurred twice in such different places and such different conditions, I argued that the rise of farming was destined to give rise to the cat.

But there was one caveat: Back in 2013, researchers weren’t sure what type of cat they had found in the ancient Chinese villages. Did the feline bones dug up from the site (which showed signs that the animals ate human food and were well cared for, hence the idea they were tame or domesticated) belong to Near Eastern wildcats (Felis silvestris lybica), the ancestors of today’s house cat and the first cats to be domesticated about 10,000 years ago in the Middle East? Or were they a different species of feline, perhaps one of the small local wildcats such as the Central Asian wildcat (Felis silvestris ornata) or the leopard cat (Prionailurus bengalensis)? If the former, the cats likely came to Chinese farming villages via ancient trade routes and were already domesticated. If the latter, Chinese villagers may have embarked on a completely separate domestication of the cat from a local species.

And that’s what a new study has found. The Chinese cats were leopard cats, suggesting that ancient Chinese farmers had begun to tame a separate species of feline than the one that had already entered human society in the Middle East. Though there’s no evidence that this line of cats survived (modern housecats have no trace of leopard cat DNA), the study adds further weight to the idea that farming–which was happening all over the world, often with local populations of small felines nearby–played a key role in the domestication of cats. Farming and grain storage attracted rodents, which in turn attracted local wildcats. When humans saw the utility of these cats, the thinking goes, they kept them around, and the cats themselves became tamer over time.