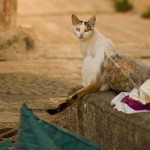 On the road. Scientists are looking for better ways to combat the world's homeless pet problem. (Credit: Victorgrigas, Wikimedia Commons)

Next week, I’ll be the keynote speaker at the 5th International Symposium on Non-Surgical Contraceptive Methods of Pet Population Control. The conference title is a bit of a mouthful, but the basic idea is this: Can scientists develop a drug that will permanently sterilize dogs and cats? Or, put even more simply, can we make “the pill” for pets?

Now a lot of you may be asking, “Don’t we already have birth control for our companion animals?” Well, yes. Spay/neuter has been around for decades. But it’s not a perfect solution. For one, it’s expensive. That means not everyone can afford to sterilize their pet, even at a low-cost clinic. For another, it’s time consuming. That’s been a huge problem for non-profits trying to tackle America’s feral cat problem. With tens of millions of these felines on the streets, volunteers can’t catch and sterilize them quickly enough to keep up with their numbers. And if you think things in the U.S. are bad, consider China and India, which are home to tens millions of stray dogs that bite and spread rabies, yet these countries lack the resources to implement even meager spay/neuter programs. As a result of all of these limitations, millions of cats and dogs are euthanized in U.S. shelters every year, and millions more are shot and poisoned around the globe. If scientists could develop an injection or pill that would work as well as spay/neuter surgery, we might have a shot at eliminating the world’s homeless pet problem.

Enter the Alliance for Contraception in Cats & Dogs (ACC&D). Founded in 2000, the Portland, Oregon-based non-profit has been working with scientists and animal welfare advocates to create a non-surgical sterilant for pets. In late 2009, the mission got a huge boost from a U.S. billionaire named Gary Michelson, who announced $75 million in grants and prize money for the development of such a product. The announcement spurred dozens of research teams to begin brainstorming a solution. Some have proposed drugs that would kill the cells that produce sperm and eggs, treating them, essentially, like cancer. Others hope to go after the brain, shutting down pathways involved in fertility and reproduction. I covered these efforts in my award-winning 2009 article in Science, A Cure for Euthanasia?

ACC&D is behind next week’s symposium. It will be giving an update on these efforts and describing some new approaches to the problem of pet overpopulation. I’ll be talking about the topic of my book and what feral cats teach us about the changing status of pets in society. I hope you’ll check out the important work this organization is doing!