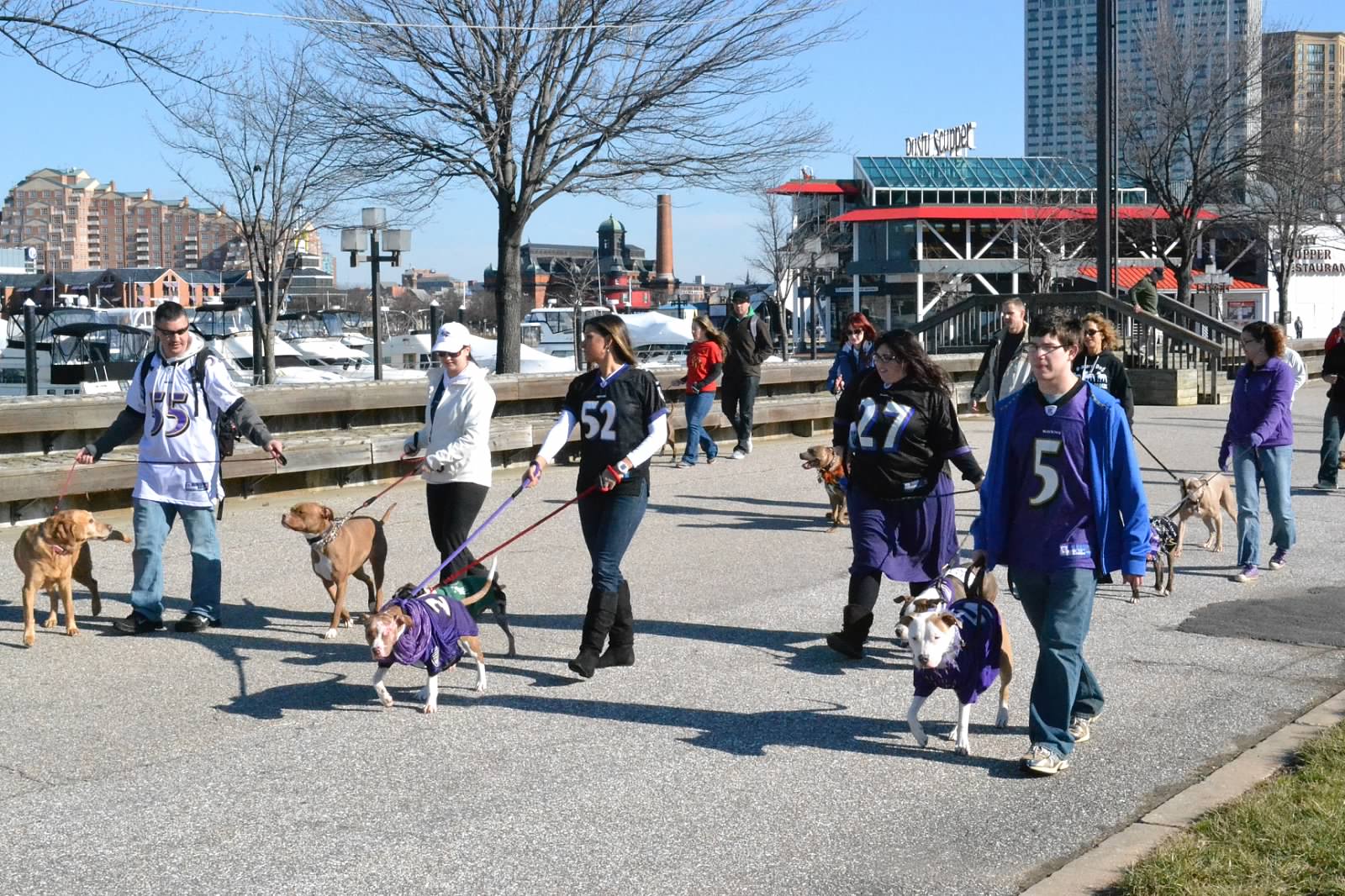 And we're off! Pit Bulls on Parade gets started. (Credit: Ashley Wiestner)

Love them or fear them, Baltimore has been ground zero for pit bulls since 2007. That year, a 10-year old boy from Towson, about eight miles north of the city, was nearly killed by one of the dogs while playing with some friends. The attack set off a series of legislative proposals and court cases that culminated in a 2012 decision by Maryland’s Court of Appeals known as Tracey v. Solesky. The judges ruled that pit bulls and pit bull mixes were “inherently dangerous”, and that anyone harboring them was liable for their actions, even if the dog had never been aggressive before. Since then, the canines have become canis non grata in apartments and neighborhoods throughout the city. But pit bull advocates have been fighting back, hoping to convince the public that these are good dogs that have just gotten a bad rap.

The day before Martin Luther King Day, I drove down to Baltimore’s Inner Harbor to witness one of these efforts, a monthly march of local dogs known as Pit Bulls on Parade. The event was organized by Pauline Houliaras, the president and co-founder of B-More Dog, a pit bull advocacy group. She met me at a marina near the harbor just a few minutes before it began. With her was Ruby, a five-year-old yellow pit bull with white splotches on her feet and a purple Baltimore Ravens bandanna around her neck. (Purple would turn out to be the color of the day;Baltimore’s home team was about to challenge the New England Patriots for a spot in the Super Bowl.) “We wanted to improve the image of pit bulls, and show people what the average dog owner looks like,” she said. “What you see on TV is not reality.”

Soon, more dogs began showing up. About 20-odd owners and their pit bulls began gathering around Houliaras. Ruby was whining and whipping her tail, anxious to join the others. “I know, it’s very exciting,” Houliaras cooed to her. “Just relax. This isn’t a play date.” 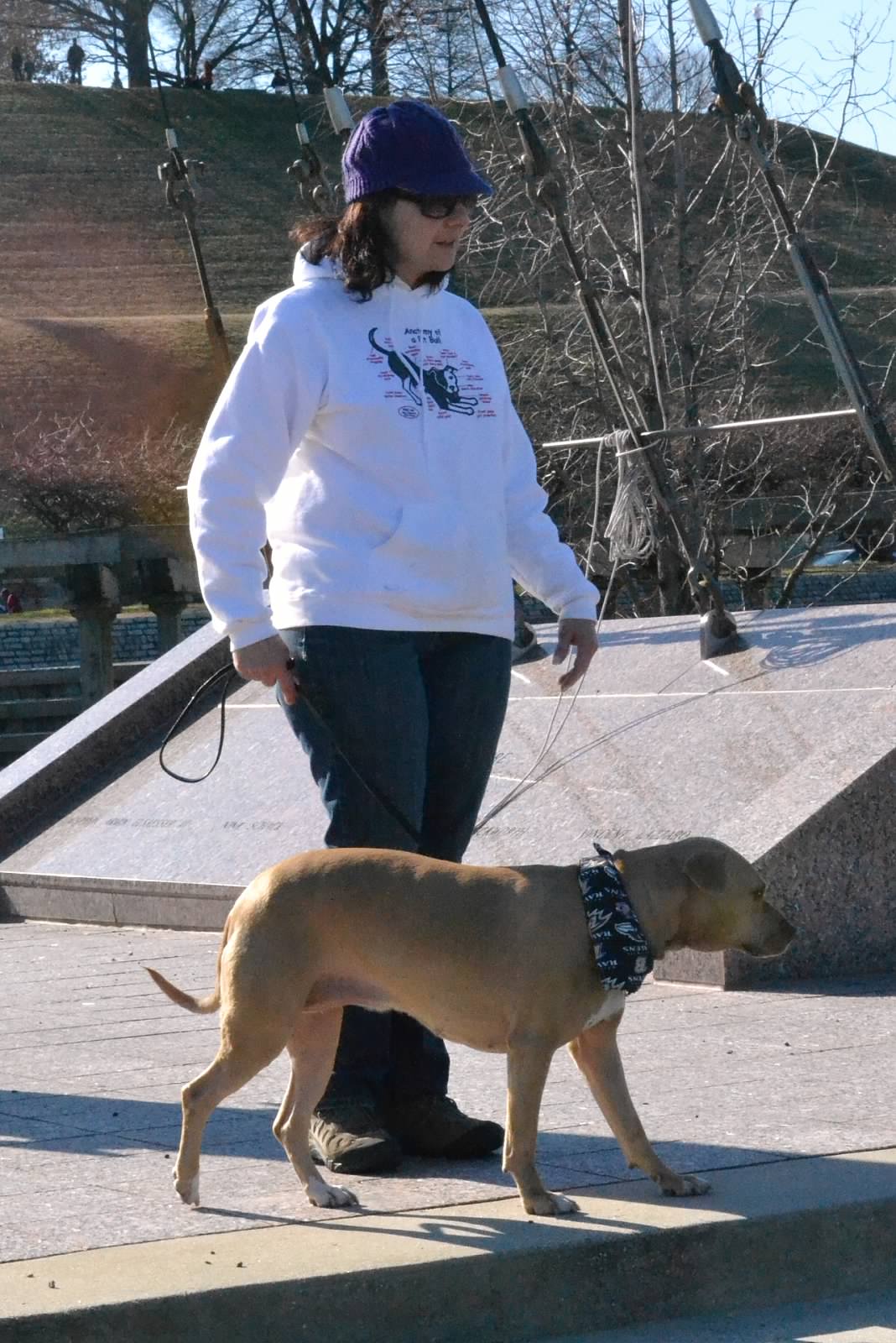 If anyone could convince the public that pit bulls aren’t demons, it’s Ruby. With her soft, golden eyes and gentle demeanor, she was a giant pillow of love, and I had trouble taking notes because she kept licking my face. She had no reason to be so friendly. Houliaras got her from a friend, who found her wandering the streets. Ruby’s face was pitted with small, furless patches that Houliaras said are likely scars from dogfighting. Some suspect Ruby was a “bait dog”—too docile to attack others, her former owners sicked other pit bulls on her to train them to fight. The owners also may have forced her to breed, strapping her down to “rape stands” common among dogfighters. When she ceased to be useful, they threw her away. “She was malnourished. She wasn’t housebroken. She didn’t know any commands,” said Houliaras. “But she was a sweetheart.” Now, in addition to leading the parade, Ruby accompanies Houliaras to inner city schools, where she sits patiently as children with autism and educational disabilities read books to her. “They won’t read to anybody else, but they’ll read for Ruby,” Houliaras said. “She doesn’t judge them. She just looks at them adoringly.”

Houliaras got up and addressed the small crowd. “How many people are here for the first time?” “Who has dogs up for adoption?” Then she laid out the ground rules: If anyone approaches you, feel free to stop and tell them about your dog; you can catch up to the rest of us later. There are ducks in the water; if your dog gets excited by wildlife, be vigilant. If your dog gets stressed out, take a break; “It’s supposed to be fun for them too.” Then we were off, strolling along a concrete path towards the crowds of the Inner Harbor’s promenade, a walk of tourist shops, museums, and pricey restaurants that curves around a thumb-shaped inlet of the Chesapeake Bay. We passed a marching band huddled by the side of the path for a photo op. About thirty strong, they were dressed in purple and white, and they’d unfurled a banner that read, “Lesbian and Gay Band Association.” They cheered and tapped their drumsticks as we passed. 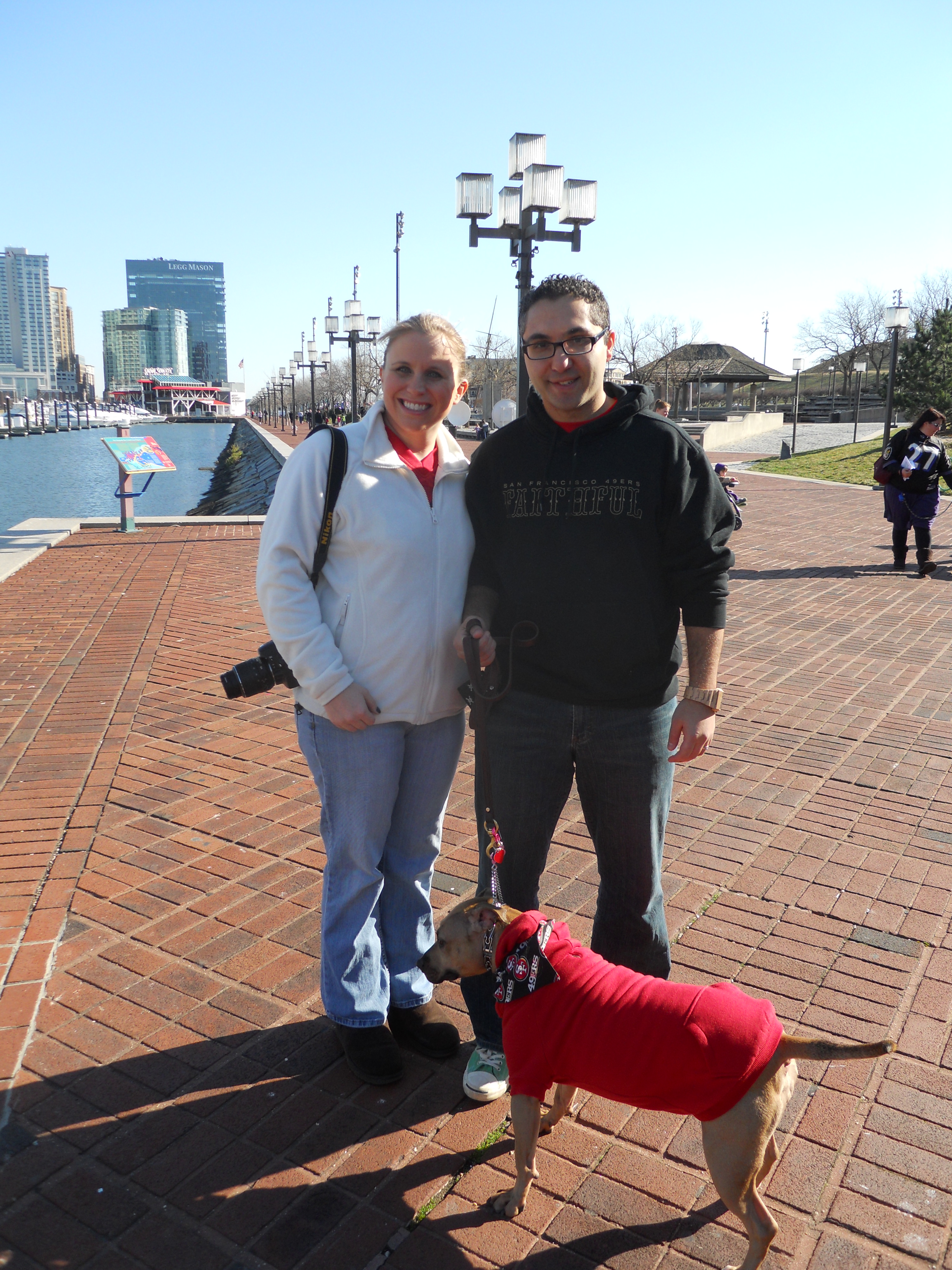 I separated from Houliaras and approached a young couple walking Lilly, a brown pit bull in a red sweater. When I inquired about the dog, the woman, Erin, smiled. “We’re accidental pit bull owners,” she said. “We’d been looking for a dog for two years. We kept going back to shelters, but I kept saying, ‘I don’t want a pit. I don’t want a pit.’ We didn’t know anything about them except for what was in the news. Then we saw Lilly at BARCS. They found her in an abandoned house with a bunch of dogs who were in bad shape. She was adorable; we just had a good feeling about her. And I was like, ‘Ok, I want her.’” This is their second time at the parade. “Lilly’s super sweet,” said the man, Amir. “She’s a great ambassador.” 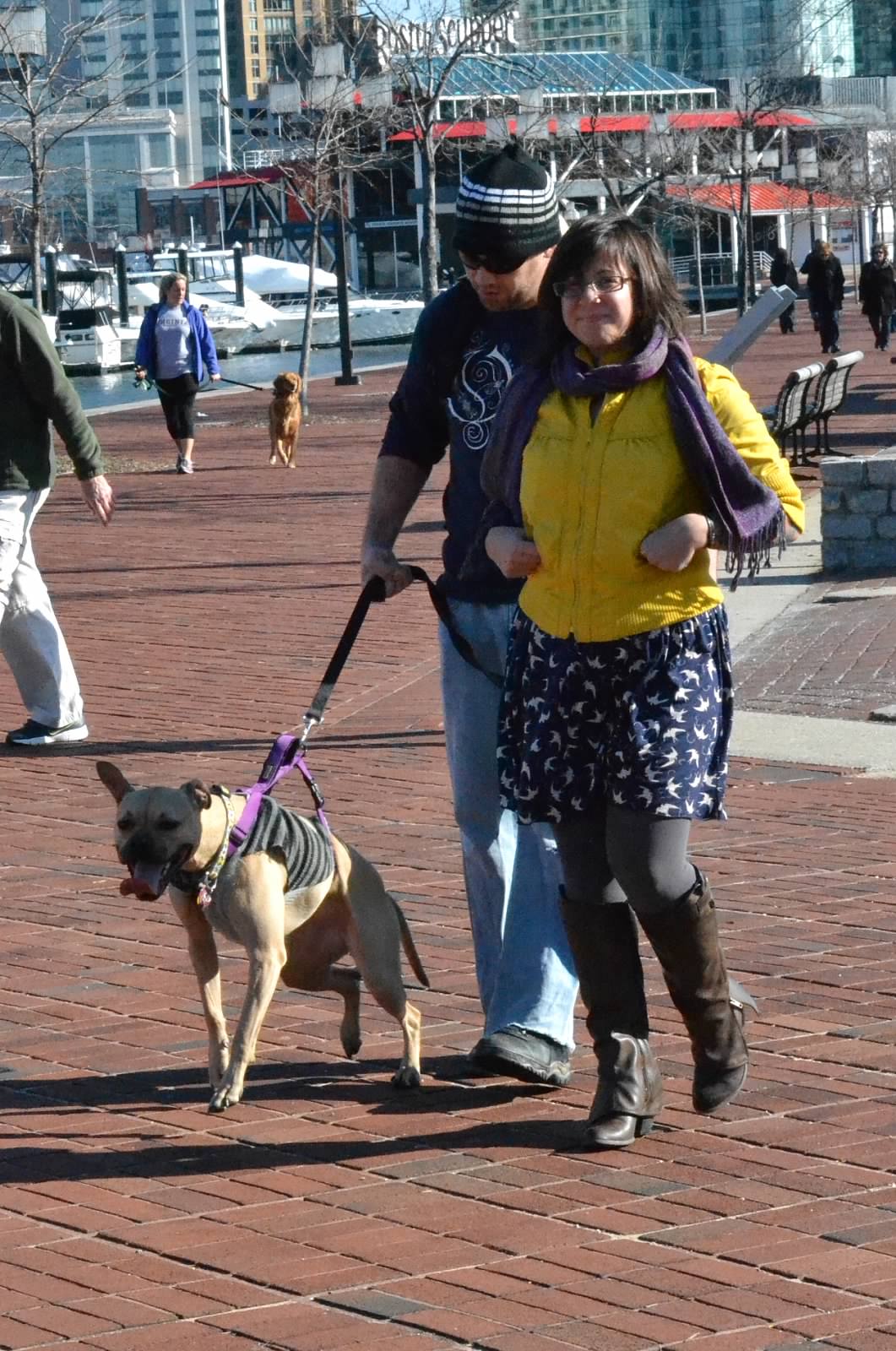 Next, I passed Liz and John, a couple in their mid 20s with a tan pit bull named Sunny in tow. She was wearing a purple harness, but it was just a coincidence. “You’re talking to two of the least football fans in the world,” laughed Liz. Sunny was tugging on her leash, eager to catch up with the other dogs. “She’s excited,” said John. “She’s being a pain in the butt today.” A five-year-old boy clinged to his mother as they pass; “Is he going to bite me?” he asked her. A few minutes later, a girl of similar age walked by with her mom; “Awww… a doggy,” she said, reaching in to pet Sunny. 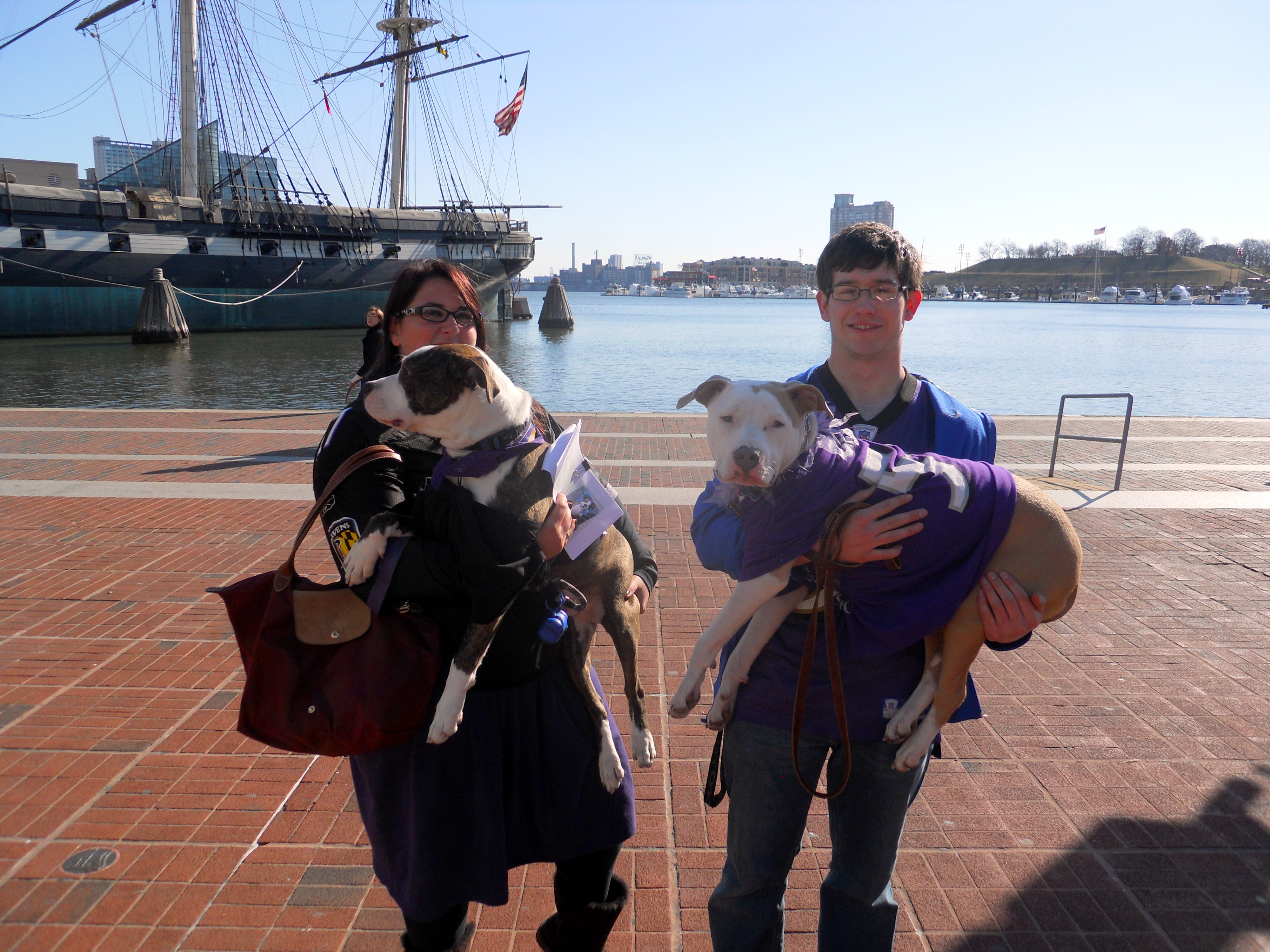 We reached the half-way point, the main part of the promenade, where locals and tourists had gathered to window shop and gaze at the historic ships in the harbor. I noticed that a small crowd had congregated around two parade walkers, Lauren and Keith, who looked to be in their late teens, and their two pit bulls. (A magician nearby making balloon animals was virtually ignored.) They own one, Colby, a brown dog with a white face and paws, wearing a Ravens jersey. The other, Bumble, was brindle on her top and white on her front, and she was wearing an “Adopt Me” sign on her back.

Lauren and Keith have been participating in the parade for five months now, partly to help a local shelter adopt out dogs like Bumble, partly to overcome the pit bull stigma. “When I’m out walking Colby, people will actually run away from me,” said Lauren. “One woman was petting him, and when I told her he was a pit bull, she jerked her hand back like she had just touched a hot stove.” Today’s crowd was decidedly more open-minded. Some wanted to pet the dogs, others said they have pit bulls of their own at home, and still others expressed a genuine interest in adopting Bumble. Keith tried to seal the deal by picking up the sixty-pound canine and cradling him in his arms like a teddy bear. “Please mom, please can we have him?” said an eight-year-old boy to his mother. A tall ship nearby fired its cannon. Everyone jumped out of their skin, but the dogs just kept wagging.

I hung out with Lauren and Keith for so long that I eventually saw Houliaras approaching. She and a few others had already reached the end of the route, and now they were headed back. When we met up, she told me about B-More Dog’s recent activities. In addition to the parade, the group brings pit bulls into elementary school classrooms and uses them to teach the students to be kind to animals. “The theme is dogs and cats have feelings too,” she told me. “Sometimes the kids will say it’s the first time they touched a dog.” The group also stages Community Pit Bull Days, traveling to poor areas of the city and offering free vaccines and spay/neuter. B-More Dog has also been lobbying the Maryland legislature to overturn Tracey v. Solesky, rallying outside the statehouse and testifying in front of a task force on Breed Specific Legislation. “They’ve got to fix this thing,” Houliaras said. 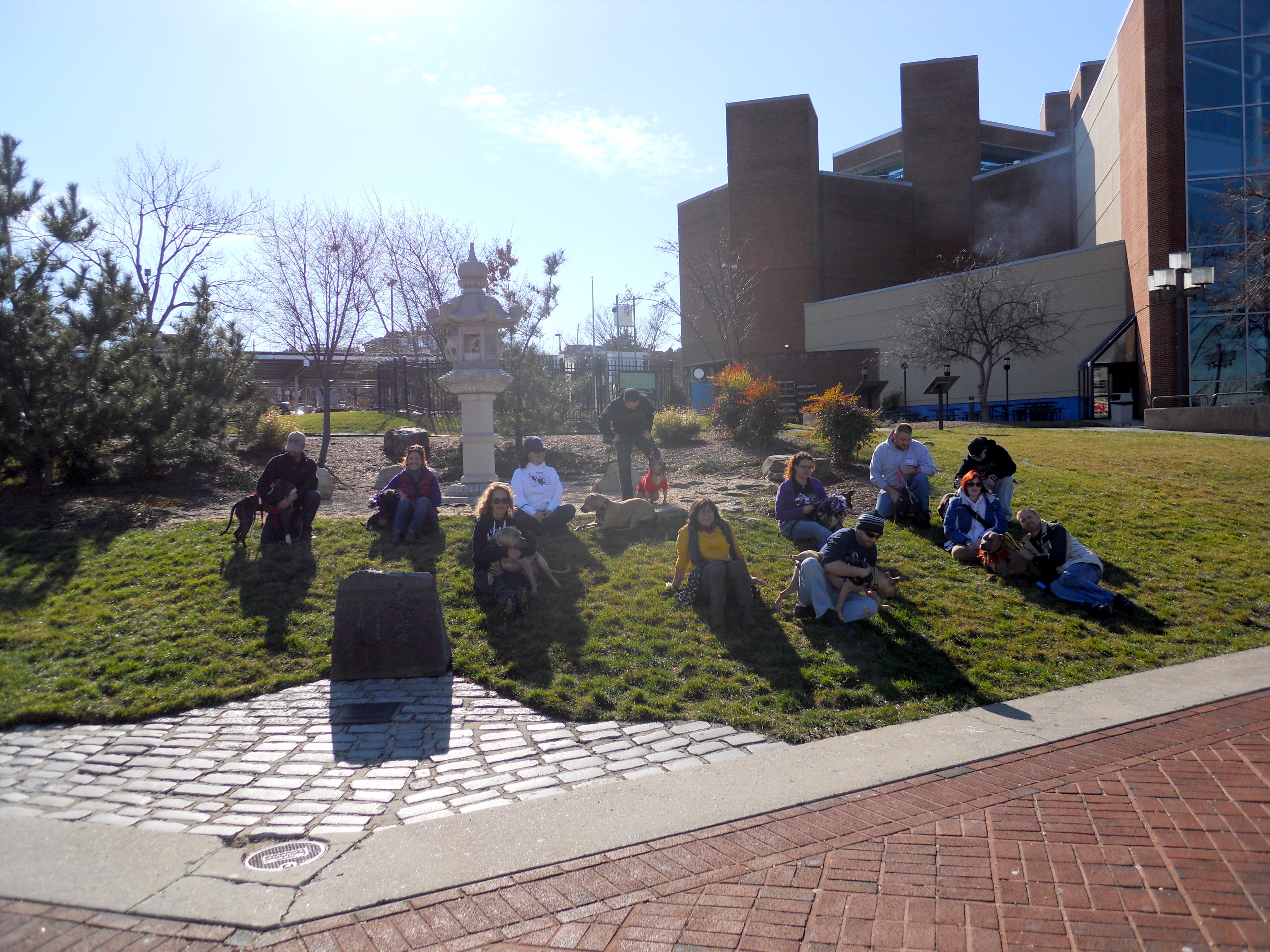 All done! Everyone sits down for a rest. (Credit: David Grimm)

The parade ended on a grassy hill, just a few yards from where it began. The group was a bit thinner now; only about eight pit bulls remained. The rest had gone home or were still entertaining strangers on the promenade. Owners lounged on the ground, while the dogs caught their breath and chewed some sticks. I asked Houliaras what it would take for pit bulls to be embraced again by society. “Sometimes I think it’s impossible,” she sighed. “It’s like when I talk to my vegan friends; are they really going to get Americans to give up their hamburgers? But who knows? We’ve definitely seen a shift in how people care about their dogs. They’re definitely much more a part of the family.” Then she glanced over at Ruby, sprawled out on the grass, gazing back into her eyes. “As soon as people meet one or two pit bulls,” she said, “they usually fall in love.”

A jogger ran by in a purple and white jersey. “Go Ravens!” Houliaras shouted. “Go pit bulls!” he shouted back.