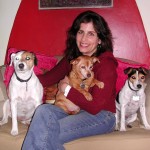 Deborah Knaan’s office is cluttered with animal pictures. Framed photos of small, scruffy white dogs on her desk. A holiday card featuring a Sheltie mix on Santa’s lap. Walls plastered with mutts posing next to superheroes and police officers, extolling the virtues of shelter adoption and railing against the injustices of animal cruelty. It’s an appropriate setting for a woman who oversees the prosecution of the vast majority of animal crimes in Los Angeles County. Knaan and her army of 28 prosecutors handle nearly every beating, burning, and killing of cats, dogs, and other creatures that result in arrests in this 4000-square-mile area of nearly 10 million people. She’s won accolades from the Humane Society of the United States and the Animal Legal Defense Fund, and her efforts have inspired other prosecutors nationwide. And yet, by Knaan’s own admission, she “didn’t give a rat’s behind” about animals until 13 years ago.

That’s when she met Ziggy. In 1999, Knaan and her husband purchased the Jack Russell Terrier puppy from a backyard breeder. “That’s how little I knew about animals at the time,” she told me. “I had no clue about shelters, or rescues, or pet overpopulation.” Still, that didn’t stop Ziggy from changing her life. “I guess,” she paused, thinking back to the day she first held the dog in her arms, “it’s a feeling that most women have when they have a child.” From that moment on, Knaan decided that she would dedicate herself to helping animals. She became a vegetarian. She educated herself about animal cruelty. And she began visiting local shelters, looking for the most hard-luck cases she could find: 14-year-olds with heart conditions, mutts missing most of their teeth, blind dogs with arthritis that were about to be euthanized. Knaan took them back to her place, cared for them, and found them homes. But it wasn’t enough. “There were tens of thousands of dogs I wasn’t helping,” she said. “I was essentially sticking my finger in a dyke.”

So Knaan began wondering if she could put her legal skills to use. She had been a deputy DA for a few years, hauling rapists and child molesters into court for the LA County District Attorney’s office, the largest prosecuting agency in the country. At the time, no one was taking animal crimes seriously. Cops didn’t arrest abusers, and prosecutors didn’t want to waste their time. Knaan aimed to change that. In 2005, she petitioned her boss, the head DA, to create a program dedicated to prosecuting animal crimes. Similar units existed for domestic violence and child abuse. They ensured that important cases didn’t fall through the cracks. “Why don’t we have one for animal cruelty?” she asked. She got no response.

Knaan was undaunted. Perhaps it was the years she’d spent as a platoon sergeant in the Israeli army, commanding a division of soldiers with criminal backgrounds. Or maybe it was just the look in Ziggy’s eyes. She volunteered to serve on a city commission that manages the LA Department of Animal Services, which runs the city’s shelters and handles day-to-day animal control issues, from collecting strays to investigating cases of nuisance barking. There, Knaan helped set up a program to license dogs online, increasing spay/neuter rates, and she got animal control officers to start asking questions whenever someone tried to drop off an injured pet at a shelter. “They used to just accept the animal, no questions asked,” she said. “Now they take people aside and talk to them. If it’s clear the person harmed the animal, I tell them, ‘You can’t let them walk out the door without filing charges.’”

Then, in 2007, Knaan received a surprise phone call: the D.A.’s Office had decided to adopt her proposal. It created the Animal Cruelty Prosecution Program—the only one of its kind in the country—and it put Knaan in charge. She would oversee 28 prosecutors in offices around LA County, training them in the complexities of animal law and making sure they litigated every animal crime to the fullest. She would also implement so-called vertical prosecution, which mandates that a single prosecutor follow each case from arrest to conviction. Cops now had a much better chance of getting charges filed against animal abusers, and they pursued animal crimes with new vigor. “It was a dream,” she said. “It combined the best of everything I cared about.”

As of today, Knaan’s program has prosecuted hundreds of cases of animal cruelty. The majority of these have culminated in convictions, putting animal abusers behind bars for up to 18 years. She’s also set up a database that advises new prosecutors, from the best charges to file to good questions to ask potential jurors. “I used to get panicked calls from the courtroom,” she said. “Now prosecutors can just go online.” The program has even bled over to other branches within the DA’s office. A deputy DA called Knaan the other day about a burglar who had beaten a couple of guard dogs when he broke into someone’s home. The prosecutor wanted to know if he could tack on an animal cruelty charge. “That never would have happened before we had this program in place,” Knaan said. “We’re seeing a record number of cases being filed.”

In the meantime, Knaan has continued to fight for animals outside the courtroom. She crafted a state law that prohibits anyone convicted of mistreating an animal from owning pets for up to 10 years. She frequently speaks to the public about how to spot and report animal cruelty. And she’s planning on creating a program that would train grocery store employees to look for cats and dogs trapped in hot cars when they collect shopping carts. She also travels the state, trying to get other DA offices to start their own animal cruelty prosecution units. “Once you have a program like mine,” she said, “it ups the ante for everybody.”

The largest frame on Knaan’s desk sports a photo of Ziggy. He’s still around, but he has developed diabetes, and Knaan gives him insulin shots twice a day. She keeps his picture close to remind herself of all of the animals out there that need her help. Like Ziggy, she knows she won’t be here forever, but she hopes the program and policies she’s set in place will continue to protect dogs, cats, and other creatures far into the future. “Whatever I’ve done here,” she said, “I want to make sure it keeps going after I leave.”

Researchers stress that the benefits outweigh the risks, and the vaccine is still the best hope for vaccinating lar… https://t.co/wDfhQyrTIT
- Monday Apr 12 - 12:51pm