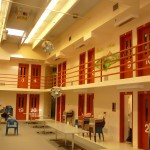 A peek inside Cell Block B. (Credit: Sheriff Joe Pelle)

I never imagined that writing a book about cats and dogs would land me in the Boulder County Jail. But there I was on a Friday afternoon in late September, surrounded by 15 inmates in the middle of Cell Block B—and looking for the exit.

At that moment, I was more cold than afraid. The guards had cranked up the AC, and I stood shivering, my arms crossed tightly against my chest. The cell block was large and sterile, with a drab gray floor, chalky cinderblock walls, and round, convex mirrors hinged to every corner. The only color came from thirty dark orange doors that framed the room, each branded with a large white number and harboring two narrow glass slits for windows. At a signal from a guard a few moments earlier, the doors had swung open, and the prisoners emerged from their closet-sized cells, pouring into the middle of the space in which I was standing. One—heavily-tattooed with a bald head, tan skin, and a long, ragged goatee—headed straight for me. He had something in his hand.

This was all my fault. A month earlier, I had phoned Marc Bekoff, the world’s foremost authority on animal emotions. I was writing a chapter on how science is breaking down the barriers between pets and people, and I was hoping he could tell me whether dogs and cats feel the same things we do. During our conversation, Bekoff mentioned that he volunteered at the local jail. He teaches a class on animal behavior as part of Roots & Shoots, a community outreach program founded by his friend, Jane Goodall. Sometimes he chats with the inmates about dogs and cats. My interest piqued, I asked if he wouldn’t mind me flying out and sitting in on a class. He shot a couple of e-mails to the jail, and I was cleared for takeoff.

I met Bekoff at his cabin in the woods outside of Boulder, Colorado. A wiry 66-year old who wore bright yellow Crocs and tied his reddish-gray hair back in a ponytail, he told me he had first started teaching the class 11 years ago. The inmates who take it are “in transition,” meaning they’re typically either entering the jail from a maximum security prison—or are about to go to one. “I’ve had everyone from a virtuoso pianist to a guy who killed his step-parents,” Bekoff told me. One of the prisoners used to make sure nothing happened to him. (“I only needed him once,” Bekoff said cryptically.)

Given the low value many of the inmates seem to have placed on human life, I didn’t expect them to hold animals in high regard. But Bekoff told me the opposite was true. A lot of these guys come from broken and abusive homes. Their parents ignored them, beat them, or worse. “For many, their best friend growing up was a cat or a dog,” he said. “Someone who loved them no matter what.”

After a quick lunch, Bekoff and I hopped into his old white Subaru Outback and drove out to the jail. A couple of miles from downtown, we pulled into a large parking lot carved into a field of grass and trees. Children rode their bikes in a small park nearby, and the Rocky Mountains seemed to surround us on all sides. It was a view wasted on the boxy, adobe colored structure that jutted out from the middle of the asphalt—a two-story behemoth with featureless walls and practically no windows. We parked the car and headed inside.

I had never been inside a jail before, and on first impression it reminded me a lot of a doctor’s office. Bekoff and I entered a small lobby, where a receptionist handed me a clipboard full of paperwork. A vending machine buzzed nearby, and a handful of people sat in chairs along the perimeter of the room, seemingly waiting for an appointment. But the doctor vibe quickly faded when I was asked to remove everything from my pockets and handed a badge with a large black “E” on it. (I would later learn that it stood for “escorted visitor”.) Then, a burly guard everyone referred to as “The Commander” entered the room and guided me and Bekoff into the heart of the jail. We walked a maze of narrow, windowless hallways, occasionally stopping at a door and staring up a security camera before it would open. Finally, we arrived at a command center, with a couple of guards in swivel chairs, a control panel, and a door to Cell Block B. Bekoff and I walked inside, and The Commander closed the door behind us.

A few minutes later, the orange doors of the cell block would swing open, the inmates would come streaming out, and one would head my way with something in his hand. “Hey!” he shouted, advancing on me in his blue scrubs and bright orange sneakers. “I want to show you something.” He thrust an object in front of my face.

It was a picture of his cats. “These are my little ones,” he beamed. “My wife sends me pictures of them instead of the kids.” The prisoner, whose name I would later learn was Richard, owned a couple of pit bulls as well, plus a turtle and three fish. As he began to tell me all about them, another prisoner approached me. This one, named George, was in his mid 60s with short white hair and a band-aid slapped across his left temple. He pulled out a picture of two collies standing on a stack of tires. “These are my grand dogs,” he smiled. “The one on the left is the fastest dog west of the Mississippi.” More inmates crowded around me. More pictures of pets. I felt like a judge at a proud parent contest.

After a few minutes, Bekoff came over and asked me to help him arrange some plastic chairs and tables in the middle of the room. We took a seat, and the prisoners followed suit. Staring out at a variety of ages, races, and tattoo patterns, I was reminded of the worst kids in my high school—the ones who dropped out well before graduation. Yet, as we started chatting, I found the inmates surprisingly attentive, gregarious, and well-spoken.

Bekoff asked if the guys considered their pets part of the family, and he was met with an enthusiastic chorus of “Yeah!”s. “Our dogs get Christmas and birthday presents,” said George, who I learned used to be a lawyer. “I treat my cats just like I treat my daughter,” someone piped up from the back. “Our pets run our house,” hollered Mark, a redhead with crimson skin.

Many of them saw themselves in their pets. Russell, a muscular inmate with short black hair who had been in and out of prisons his entire life, said that his dog had been saved from an abusive home, just like he was. “Me, my wife, my German Shepherd—we’re all rescues. We’ve all had the same life.” Matt, a spiky gray-haired man in his early 40s, said that as a prisoner he felt like a stray that no one wanted. “We’re outcasts.” Growing up, he said, his parents beat his pets. But that’s not an attitude he’s inherited. “I’ll punch a guy right in the mouth, but not a dog or a cat,” he said. “I’ll pet my kitten and not think twice about getting into a bar fight.”

Much of my book deals with the fact that cats and dogs are legally considered property–no different than a couch or a car. That’s a fact that doesn’t sit well with many pet owners—and it didn’t sit well with the inmates either. “How is your gold chain worth more than your dog?” said Russell. “If you destroy a couch, no one cares. If my German Shepherd died, it would devastate my wife and my daughter. Pets are priceless.” These days, if anyone feels like property, it’s the prisoners themselves. “They’ll say, ‘I’m not a human being anymore. I’m property of the state,’” Bekoff told me later. Meanwhile, cats and dogs have become more than property—at least in the eyes of those who love them. “Years ago, these inmates would have said, ‘They’re treating me like a dog,’” Bekoff said. “They don’t say that anymore.”

Given how the prisoners felt about their own pets, I asked them if dogs and cats should have rights—that is, whether they should be granted a sort of legal “personhood”. On this, they were divided. On the one hand, they believe their pets are sentient and emotional beings, and they want them to be well treated and protected by the law. They told tales of their animals experiencing separation anxiety when they left for prison, sniffing piles of their clothing long after they had gone. But for many of them, it was hard to imagine an animal having more rights than they did. “Just feel how cold it is in here,” said George. “If the Humane Society kept animals at this temperature, there’d be a public outcry.” Everyone grunted in agreement.

As the class drew to a close, an African American inmate in the back, who had been silent the entire time, raised his hand. His name was Darren, and he was in his mid 40s. “I think the thing we should remember,” he said hesitatingly, “is that some animals have less rights than others. Think about pit bulls. Everyone sees them and thinks they’re dangerous. But just because you’re a pit bull don’t mean you’re bad.” His voice gained confidence. “These animals give us a chance when no one else does. And when you’re someone like me, it feels good to be needed. So yes, they should have rights.” Then, smiling, he said, “Just don’t give them the right to vote.”

The Commander entered the room, and Bekoff and I got up to leave. The inmates crowded around me once more, this time asking when my book was coming out, and if I would send them a copy. I assured them I would, though I had no idea how I’d ever track them down. Before we had driven over, Bekoff told me that he used to see prisoners as radically different from other human beings. But now he sees many of them as normal folks. I understood what he meant. These guys may have looked like the worst kids in my high school, and some have done unforgivable things. But they’ve got the heart to care about cats and dogs—to be loved and to return that love. They had made me think about what it meant to be a person, and what it meant to be valued by society. And for that I was thankful for their company.

Just don’t ask me to spend the night.