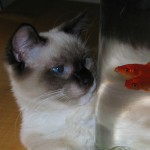 When I began writing the chapter in my book about how new scientific discoveries are blurring the line between pet and person, I knew it was going to be tough to find anyone studying the feline mind. As the owner of two cats, I’m aware that they probably don’t make the best research subjects. But even I was surprised by how few researchers study them. A canine revolution has been taking place in labs around the world for the past 15 years, but cats have been largely left in the dark.

After a few weeks of hunting, and more than a dozen e-mails, I finally found a researcher who studies cat cognition: Christian Agrillo of the University of Padova in Italy. When I got him on the phone, he confirmed my suspicions about why there aren’t more scientists like him out there. “I can assure you that it’s easier to work with fish than cats,” he laughed. “It’s incredible.”

Agrillo studies something called numerical competence. That’s essentially the ability to distinguish a small quantity from a larger one. To figure out how and when the skill evolved, he’s studied it in a number of animals, including monkeys, birds, and inch-long mosquitofish. And yes, he’s also looked at cats.

The test Agrillo uses is fairly simple. He places three black dots over a desirable object (like a plate of food or a door that fish can swim out to be with other fish), and two dots over an undesirable object (like an empty plate or a door that leads to an empty part of a fish tank). Agrillo and colleagues then look to see if, over multiple trials, the animals can distinguish between the two quantities. He’s published ten papers on fish, but only one on cats. Here’s why:

Cats are very hard to motivate, Agrillo told me (though he didn’t really need to). To reduce the number of variables, he needed to bring cats into his lab—not study them in their homes. And that meant looking for owners with extremely docile and compliant animals. Even then, many of the cats didn’t take to the lab and Agrillo had to turn most of them away. “We had to say to the owners, ‘Sorry, we can’t use your cat. It’s not interested in the experiment.’”

At the end of the day, Agrillo wound up with just four cats: Nerina, Wieso, Wilde, and Suesse—all females. But even these select felines were a pain to work with. “Very often, they didn’t participate in the experiment or they walked in the wrong direction,” he said. “It was really difficult to have a good trial each day.” 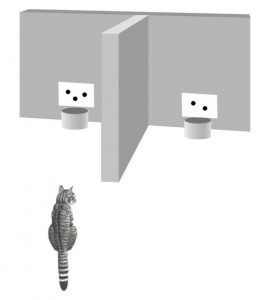 Still, when the cats did decide to cooperate, they seemed to do as well as the fish. Placed in a room with black dots stuck to a wall behind food bowls, they learned to differentiate between two and three dots (see picture above). But Agrillo wondered whether the cats were actually counting the dots—or whether they were just looking at the overall quantity of black on the wall. And sure enough, when his team increased the size of the two black dots so that they took up the same amount of space on the wall as the three black dots, the cats failed the test. They couldn’t distinguish between the two quantities. The mosquitofish, on the other hand, had no trouble.

As a cat owner, I found the results a bit humiliating. Were my cats really dumber than a tiny fish?  But then I remembered something biological anthropologist Brian Hare once told me. “It’s sort of silly to say one animal is more intelligent than another, because every animal is uniquely adapted to solve the problems in its environment,” he said. “You’d be a horrible cat, I’d be a horrible dog.”  Every species, it turns out, has evolved the skills it needs to survive.

Put another way: Counting is very important for fish. They’re highly social animals that need to keep track of each other in large schools. They use numbers every day. Cats, on the other hand, are solitary in the wild, and when they hunt they’re not concerned about number—they’re concerned about size; the bigger the prey, the better. A fish that couldn’t count would be in big trouble; for cats, counting is a waste of time.

Still, Agrillo isn’t totally convinced that cats can’t count. And, believe it or not, he wants to keep studying them to find out. Research on cats, he says, could tell us a lot about our own cognitive skills—and almost everyone else is ignoring them. “We want to study a species that no one else is studying.”