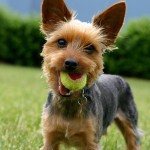 Napoleon is a doggy genius. The 3-year-old, 7-pound Yorkshire Terrier can do something even our closest relative, the chimpanzee, can’t. He can read our thoughts. And he isn’t alone. All dogs, it turns out, are human mind readers.

I met Napoleon during a recent visit to the Duke Canine Cognition Center in Durham, North Carolina. I was doing some research for a chapter in my book on how new scientific discoveries are blurring the line between pet and human, and the head of the center, biological anthropologist Brian Hare agreed to let me come down and observe some of his work. Hare is at the forefront of a canine revolution that began about 15 years ago; in a series of high-profile studies, researchers around the world have shown that dogs are capable of far more than we ever imagined.

Dogs weren’t always popular research subjects, however, at least when it came to probing the secrets of the mind. Though Charles Darwin was a dog lover—and a big believer in the powers of the canine intellect—dogs were canis non grata in the cognition laboratory for much of the 20th century. They aren’t a wild animal, and they’ve lived with us for thousands of years, so most scientists considered them artificial and even tainted. Researchers interested in the animal mind studied chimpanzees and rodents instead.

But things changed when Hare, Adam Miklosi, and other prominent scientists began to notice something remarkable about dogs. I had come to the Duke Canine Cognition Center to see what first piqued their interest. And that’s where I ran into Napoleon.

Hare was tied up when I arrived at the lab, so a couple of his grad students volunteered to show me the experiment he’s become famous for.  As you’ll see in the video below, Napoleon watches intently as grad student Courtnea Rainey squeaks his favorite toy—a miniature tennis ball–and then hides it, or pretends to hide it, under one of two red cups (the second cup is off-screen, to the left of Napoleon).  She then points to one of the cups, and the other graduate student—Evan MacLean (who is also Napoleon’s owner)—releases the leash.  In trial after trial, Napoleon always runs to the cup that is pointed at—and happily retrieves his ball.

This may seem like a simple test, and indeed, even one-year-old children can pass it.  But chimpanzees fail miserably.  They ignore the human helper, pick cups at random, and rarely score above chance.

What Napoleon had done was demonstrate a rudimentary form of a skill known as theory of mind.  That’s the ability to intuit how others see the world, and even, to some extent, know what they’re thinking.  He had recognized that when Rainey pointed at the cup she wanted to show him something; that she had a desire.

Theory of mind isn’t just a neat cognitive trick.  Scientists like Hare have postulated that the ability has been critical for the success of our species.  That it helps us work together, learn from our parents, and even communicate.  Without it, we wouldn’t be here.

Tiny Napoleon had done something more human-like than a creature that shares 99% of our DNA.  And that means that, more than any other animal on the planet, dogs could shed light on how our own mind evolved.  When we peer inside Napoleon’s head, we are, in many ways, peering inside our own.