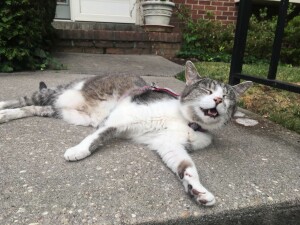 Jezebel has something to say. (Credit: David Grimm)

Cats, dogs, and babies have something in common–and it’s not just the mess they make. They all seem to elicit “baby talk” from us: short, repetitive phrases spoken with drawn-out syllables and a high pitch. If you’re a pet owner, you’re likely guilty of it–probably several times a day.

Scientists knew that dogs react to this “caregiver speech”, as it’s known. Or, as it’s known specifically for dogs, “dog-directed speech”. They’re far more likely to swivel their necks towards us or cock their heads. But no one had done a similar study on cats–until now.

As I write in Science, researchers have now tested whether our feline friends respond to “cat-directed speech”. They do, it turns out, though their reactions are more subtle than those of dogs. Their ears twitch towards us, or they momentarily stop bathing themselves. Cats, unlike dogs, also don’t respond to this type of talk from strangers; they only pay attention to their owners. That’s perhaps not a surprise as dogs are more likely to encounter unfamiliar humans, and are more likely to be cooed at by them.

But the work does reinforce the idea that cats, like dogs, are clued into the special bond we have with them: a bond that’s not unlike a mother has with her child. Perhaps that’s why cats also have evolved their own high-pitched sound, one embedded in their purrs that may evoke the attention-getting cries of human infants. We talk to our cats, but they also talk back.