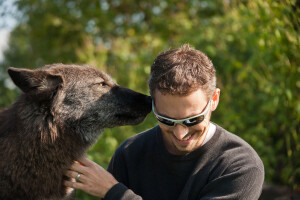 Me and a wolf named Wotan at Wolf Park. (Credit: Wolf Park)

About 10 years ago, I visited one of the most unique sanctuaries in North America. I was reporting for my book, Citizen Canine–specifically a chapter about how the wolf became the dog. Experts agree that gray wolves gave rise to today’s dogs, but just how this happened is a mystery. Equally enigmatic is how much dogs changed over the course of this transformation. Did the ability to obey commands and follow human pointing arise only in dogs, for exampel? Or were flickers of these abilities present in their wolf ancestors? Ditto for the incredible bond between dogs and humans. Were wolves also capable of such attachment?

I had come to Wolf Park to find out just how different these two animals are. The sanctuary, 70 miles northwest of Indiana, is one of the few places in the world you can get up close and personal with wolves. I was lucky enough to spend some time face-to-face with the animals. As I write in my book:

When I enter the park, I’m directed to a safety training seminar. That’s my first clue that I’m not dealing with a domesticated animal. The second is the chain-linked fence topped with razor wire that separates the wolves from everyone else. As I walk along a dirt path that leads from the visitor’s center to the beige bunkhouse where the safety briefing will be held, I catch my first glimpse of a wolf. There, on the other side of the fence, stands a small black female, her eyes glowing yellow, her ears on alert. She’s staring at me, and not in a way that makes me feel comfortable. Despite what I’ve heard about the similarities between wolves and dogs, there’s nothing dog-like about this animal. She’s cold, she’s tense, and she clearly doesn’t want me here.

All of this, and these animals had been hand-raised by people since they were just two weeks old. Clearly, there is a huge gap between dogs and wolves.

And yet, over the past couple of decades, researchers have shown that wolves are capable of some behaviors scientists once thought were exclusive to dogs. With a lot of training, wolves can follow human pointing. They can even play fetch.

Now, a new study, suggests that wolves are capable of dog-like attachment to humans. When researchers placed hand-raised wolves in a room with a caregiver and a complete stranger–in an experiment known as the Strange Situation Test–and then had these people enter and exit the room at various points, the animals showed more preference for their caregiver: They were more likely to greet this person and make physical contact with them. They even seemed to calm down more when this person entered the room, suggesting that the animals viewed the humans who raised them as a “social buffer”–a source of comfort and support.

Not everyone is convinced by the work. But if true, it suggests that seeds of many of the abilities we once thought were unique to dogs were in fact present in their ancestors. That’s not terribly surprising, as evolution needs something to act on: traits rarely arise out of thin air.

Given all of this, however, it’s unlikely that the wolves that gave rise to dogs were anything like our canine pals. My visit to Wolf Park attests to that. But it does suggest that ancient humans may have gravitated towards the abilities we now favor in dogs–and strengthened them over the course of thousands of years of domestication. And bit by bit, these once-wild animals eventually became the lovable pooches we know today.

Even though the result may seem like “an amusing little factoid about human behavior,” it “shows how deeply biology… https://t.co/BmEBd0RXGJ
- Monday Nov 28 - 3:14pm

It’s unclear how many of the animals in question have been used in research, but one of two companies that received… https://t.co/RL5LZVUhiF
- Monday Nov 28 - 1:44pm

The indictment of several members of an alleged international monkey smuggling ring is sending ripples through the… https://t.co/7QPlsQ52Ix
- Wednesday Nov 23 - 10:22pm