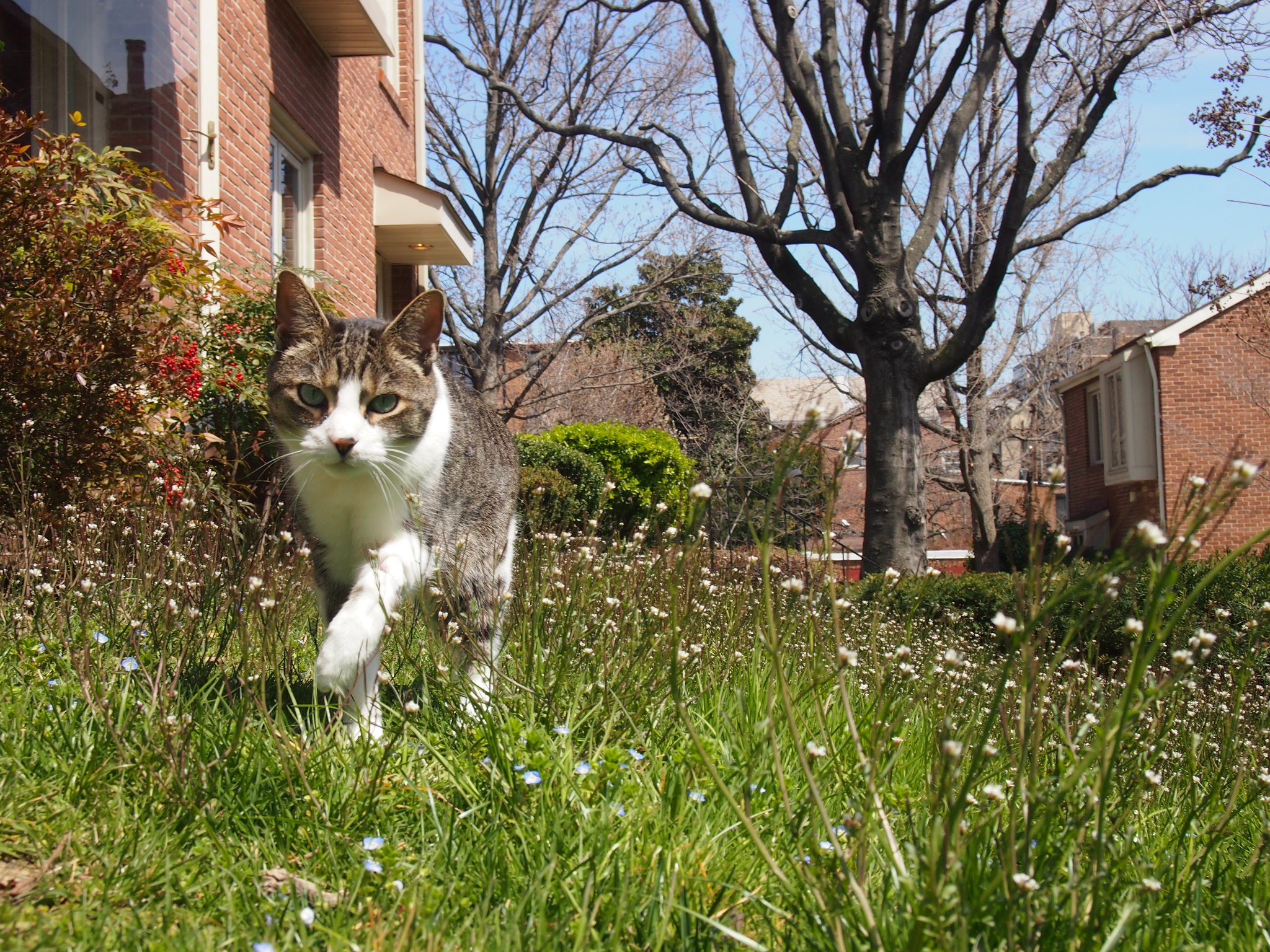 Last week, I contributed an essay to an article in the Washington Post on whether cats should be allowed outdoors. Given the controversial subject nature, I was surprised to see that all of the experts the Post contacted agreed with me: Cats, if at all possible, should have access to the outdoors. Below, is my essay in full (which was abridged in the Post version). To my readers, I want to make one thing clear: Even though I let my own cats out, I fully understand the reasons for keeping cats indoors, and it is not my intent to shame or disparage those who do so. I am merely offering my perspective on the matter. I should also note that I supervise my cats when I let them out, both for their own protection and for the protection of wildlife.

What do you do with your own cats and why? Please let me know in the comments!

When my wife and I first snapped a harness on our cat Jasper in 2005, we didn’t quite realize the ethical quandary we were getting ourselves into. We had just adopted him and his sister Jezebel from a shelter, and we felt they should have access to the great outdoors, even though we lived in Baltimore City. So we did what any crazy cat owners would do: We bought two harnesses made for tiny dogs and strapped them on our kittens.

Jasper and Jezebel didn’t take kindly to their “outfits”, as we called them. As soon as we put them on, the cats froze, then fell on their sides, as though they had been hit by a stun gun. It took a week—and lots of treats—just to get them to stand upright. Walking them was even harder: Cats, as you might expect, don’t take to a leash like dogs. You can’t follow or lead them; you just need to let them do their thing and hope for the best. Sometimes they’ll take a few steps, and you can actually pretend you’re on a walk. But more often they’ll stand next to a tree for ten minutes to chatter at a bird, or slip under a car or through a fence, forcing you to perform some pretty extreme yoga to get them back. I’m not sure if other people found our cat walks amusing or insane, but someone stopped us almost every day to chat or take a picture. If nothing else, it was a great way to meet our neighbors.

But back to the ethical dilemma. Why did we feel it was important to let our cats out in the first place? Yes, we lived in a small apartment and had both grown up allowing our cats outdoors, but by 2005 experts were recommending that felines be kept inside at all times. Veterinarians said it was better for their health: Indoor cats get in fewer fights, contract fewer diseases, and are very unlikely to be hit by a car. The wildlife enthusiasts, meanwhile, cared more about the damage that could be done by cats—mostly in the form of eviscerating birds and other small animals.

I sympathize with these concerns. Yet they don’t address one of the fundamental things I love about cats: Unlike our canine companions, our felines have retained their wild streak. To see a cat outside is to see a creature in its element: stalking through the grass, climbing trees, battling for their territory. The predator, the wildcat, the king of the jungle—it’s all still firmly ingrained in their DNA. You could keep your cat indoors and give him a comfortable, safe life. You could also keep your racecar in a garage.

So yes, we let our cats outside. We don’t walk them on leashes anymore, however. We’re still in the city, but we’ve moved to a complex that has a courtyard, so Jasper and Jezebel are free to roam for about an hour a day—while I try my best to keep track of them. We still call it “walking our cats”, but we don’t get quite as many odd looks from our neighbors.

Our erstwhile kittens are 11 years old now, and Jezebel spends most of her outside time lounging in the sun. But Jasper is as untamed as he’s ever been. He stalks insects in the underbrush, leaps mounds of pachysandra, and bares his teeth at the savage world. And then he comes home, sated and spent, ready to curl up in my lap or snuggle in one of our daughter’s cribs. Sure, he gets chased by the occasional dog, and he recently swallowed a stick that sent him to the vet, but I don’t think he’d give up his time outdoors for anything in the world. For a few minutes a day, he gets to be the cat he was destined to be.